Home » Everything You Need to know about Iron Deficiency Anemia 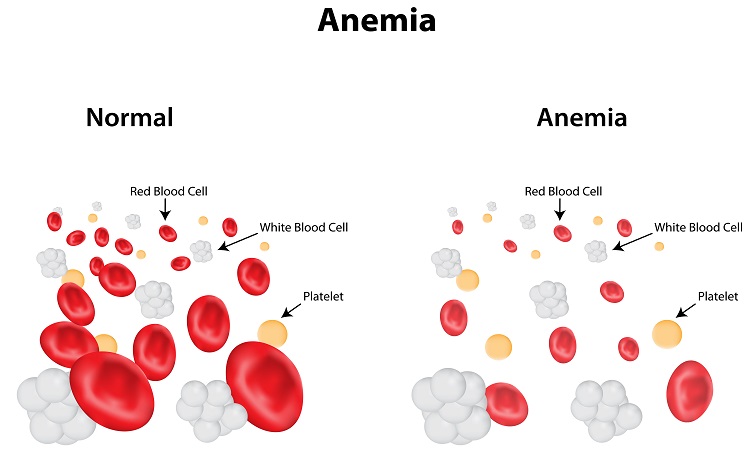 Everything You Need to know about Iron Deficiency Anemia

Anemia usually occurs when there is a decreased level of hemoglobin in your red blood cells or RBCs. Hemoglobin is the protein in the RBCs responsible for carrying oxygen to the tissues.

Iron deficiency anemia is a common type of anemia that occurs when your body doesn’t have sufficient mineral iron. Your body requires iron for hemoglobin and if there isn’t enough iron in the blood stream, then your remaining body cannot get the oxygen it requires.

The symptoms of moderate to severe iron deficiency anemia can cause:

Eating little iron for an extended period of time may lead to iron shortage in your body. Foods such as eggs, meat and some green vegetables are ideal and essential for pregnant women and young children as they are rich in iron.

Blood loss or pregnancy due to menstruation

Blood loss and heavy menstrual cycle during childbirth are common causes of iron deficiency anemia in women who can conceive.

Certain medical conditions may lead to internal bleeding and iron deficiency anemia. Some examples include – ulcer in your stomach, polyps in the intestines or colon cancer. Daily usage of pain relievers such as aspirin may lead to bleeding in the stomach.

Certain disorders or surgeries that may affect the intestines can interfere with how the body absorbs iron. Even though you may be consuming a sufficient amount of iron daily, intestinal surgery like gastric bypass or celiac disease can restrict the amount of iron that your body may absorb.

If any woman suffers from endometriosis, she may havesevere blood loss that is not visible as it is hidden in the pelvic or abdominal area.

Anemia may occur in both men and women of any age and from any ethnicity. Some people can be ata greater risk of iron deficiency anemia than others and these are:

If you are at a greater risk of iron deficiency, then choose a clinic which provides private blood tests in the UK or discuss with your doctor for any changing in dietary habits for beneficial to your health.

How it is diagnosed

Your doctor may diagnose anemia with blood tests whichconsist of the following:

A complete blood count (CBC) is usually the first test that the doctor will conduct. With CBC, the amount of all components in the blood will be measured along with:

The CBC provides detailed information about your blood that helps in diagnosing iron deficiency anemia. This will include:

For iron deficiency anemia, the hematocrit and hemoglobin levels are comparatively low. Besides that, RBCs are usually small in size.

A CBC test is usually conducted as a vital part of your regular physical examination that helps to know an individual’s current health condition. It may also be performed routinely before performing a surgery. The test will be able to diagnose what kind of anemia you may have as most people that suffer from iron deficiency don’t even know about it.

Anemia can be confirmed by undergoing a CBC test. You may talk to your doctor instead who might ask you to perform other blood tests to know how severe your anemia is for the necessary treatments. They may examine your blood through a microscope which will provide the doctors with information like:

If yourprivate GP is concerned that the internal bleeding is the reason for your anemia, then you may need to undergo the necessary tests. One test to undergo is fecal occult which helps to detect blood in your feces and know if you have bleeding in the intestine.

Your doctor may ask to undergo an endoscopy where a small camera is used on a flexible tube to view the linings ofthe gastrointestinal tract. Upper endoscopy or ECG test enables the doctor to observe the lining of your stomach, esophagus and upper part of the small intestine. A colonoscopy or lower endoscopy enables thedoctor to examine the lining of the colon or the lower part of the large intestine. These tests may help to detectthe sources of gastrointestinal bleeding.

Uterine fibroids, menstrual bleeding and pregnancy are some of the most common reasons behind women suffering fromiron deficiency anemia.

A pelvic ultrasound may help a doctor to detect the source of excessive bleeding during a woman’s periodlike fibroids. Unlike iron deficiency anemia, uterine fibroids do not show any symptoms and take place when the muscular tumors grow in your uterus. Though they are not cancerous, they may lead to heavy menstrual bleedings which is likely to cause iron deficiency anemia.

Health complications that occur due to iron deficiency anemia

Most iron deficiency anemia cases are mild and do not lead to further complications. This condition can usually be corrected easily but if the iron deficiency or anemia is not treated on time, then this can cause health problems. Some of these include the following:

A child can be born with low weight or premature, in extreme cases. Most pregnant women take iron supplements as a part of their prenatal care to avoid this from occurring.

Delayed growth in infants and children

Infants and children who have deficiency in iron can suffer from delayed growth and development. They are highly prone to some infections.

Iron tablets can restore the level of iron in your body. You can take iron tablets, which are more easily absorbed by the body.You can also take them with meals if they are the reason for stomach upsets. Take these iron supplements for a few months as they can cause black stools or constipation if you over use them.

Diets that have the following foods can help in treating or preventing the deficiency of iron:

Besides that, Vitamin C enables your body to absorb iron. If you take iron tablets, your doctor might suggest taking the tablets with Vitamin C such as citrus fruit or orange juice.

How to treatmajor cause of bleeding

Iron supplements cannot help when there is excessive bleeding that causes deficiency. Your private gp might prescribe taking birth control pills to women who have heavy periods. This can lessen the amount of menstrual bleeding every month. A blood transfusion may replace blood loss and iron in severe cases.

Iron deficiency anemia can be avoided by eating a diet that has high amount of iron-rich foods and Vitamin C.

Foods that have high amount of iron include:

Foods that are high in vitamin C include:

By diagnosing and treating iron deficiency anemia by yourself and without speaking to a qualified professional, you could do yourself more harm than good due to extreme iron levels in your blood. The complications that can arise from taking too much iron in the blood are constipation and  liver damage. If you have any symptoms of iron deficiency anemia, then it is advised to consult with your doctor immediately at the private health check up at our clinic in London.